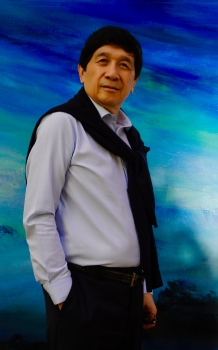 Christian Lu was born with the Chinese name 陆永安 in 1951. From a noble family, he is one of the poet Lu You’s descendants (陆游). Early, he became interested in painting and admires the masterpieces of Zhu Da, also known as Bada Shanren (八大山人), the Eight Eccentrics of Yangzhou (扬州八怪), Qi Baishi (齐白石), Pan Tianshou (潘天寿), Zhang Daqian (张大千), etc.

From 1970 to 1980, he learnt from the greatest Chinese painters. Thanks to them, he was enlightened, inspired and guided in his learning of painting. They were Liu Haisu, Li Keran, Zhu Qizhan, Lu Yanshao, Li Kuchan, Wu Zuoren, Shen Zicheng, Xie Zhiliu, Cheng Shifa, Huang Yongyu, etc.

He acquired all his knowledge regarding Art starting with the history of Chinese painting and the theory behind it. He then practiced the different Chinese art movements.

Christian Lu was determined, by painting, to develop his own style and using new themes, he opened new doors to Chinese art.

Christian Lu settled in Paris in 1981. He devoted himself to the creation and the teaching of painting. One year later, new sources of inspiration came to him and enabled him to give birth to a new form of painting.

In 1983, the International Institute of Cultural Studies whose European headquarters were in France, organised for the first time a personal exhibition dedicated to an Asian artist. Christian Lu was the one to be chosen and the theme he picked for the exhibition: «Chinese painting and occidental music».

Throughout the different art pieces, one could easily imagine Christian Lu, listening to Beethoven symphonies; with his paintbrush moving on the rice paper creating ink stains one after the other. He used Occidental music to create expressionist art.
The layout of the shapes is sometimes light and sometimes full of strength; it varies along with Beethoven’s partitions.
The exhibition was a success. Zao Wou-ki and several Chinese and foreign famous people who came to visit the exhibition congratulated his work.

The president of the Institute, Mr. Schwarz, declared in his opening speech: “Thank you, Mr. Lu, one of the most talented artists coming from the East, for having brought your paintings that touch our hearts.”

Zao Wou-ki also claimed: “In the history of painting in Paris, no artist that came from a foreign country has been able, in such a short period, to produce so many great pieces of work like Mr. Lu. I admire his imagination, innovation and courage.”
The famous sculptor, Mr. Xiong Bingming also shared his admiration: “It has been a while since Paris has seen Art that is so inspiring, that illuminates the human eye. Christian Lu has been able to find the perfect measure between the Orient and the Occident. We can state that his artistic future will shine on the French painting stage.”

Mr Lu’s exhibition has also obtained numerous praises from the media (Chinese and French). In August 1984, the editions of “Chinese Fine Arts” (中国美术) dedicated in one of its magazines an article presenting three generations of Chinese painters established in France: Zhang Daqian, Zao Wou-ki and Christian Lu.
This article described the details of Mr Lu’s exhibition. The same year, Christian Lu’s name entered the world book of famous people. In the meanwhile, he became a member of the “Maison des Artistes”.

In 1985, Christian Lu used his own name to create his trademark. He used his knowledge of painting to create silk fabrics. Creating women’s clothes was also a mean for him to bring his art to the public. Even today, his brand Christian Lu is part of the biggest French brands.

In 1996, after 15 years spent in France, naturally he dived in oil painting. The subtle influence of Western art came to him. He, then, had new ideas enabling him to give new styles to his art.

He mixes without restriction the abstract Occidental art to ethereal images of Chinese painting. Not only does he hope to show his energy, his taste in beauty, his imagination and his perspicacity, but he also wants to underline Chinese culture and his own experience of French art.

Today, after having built strong ties with all these Chinese painters, Christian Lu feels in his heart he has to pay tribute to them. He also wants to pay homage to the impressionist French painters from which he took inspiration.

After Zao Wou-ki and Chu Teh-Chun, Christian Lu is the bridge between Chinese and French art, a new path in the realm of Art.